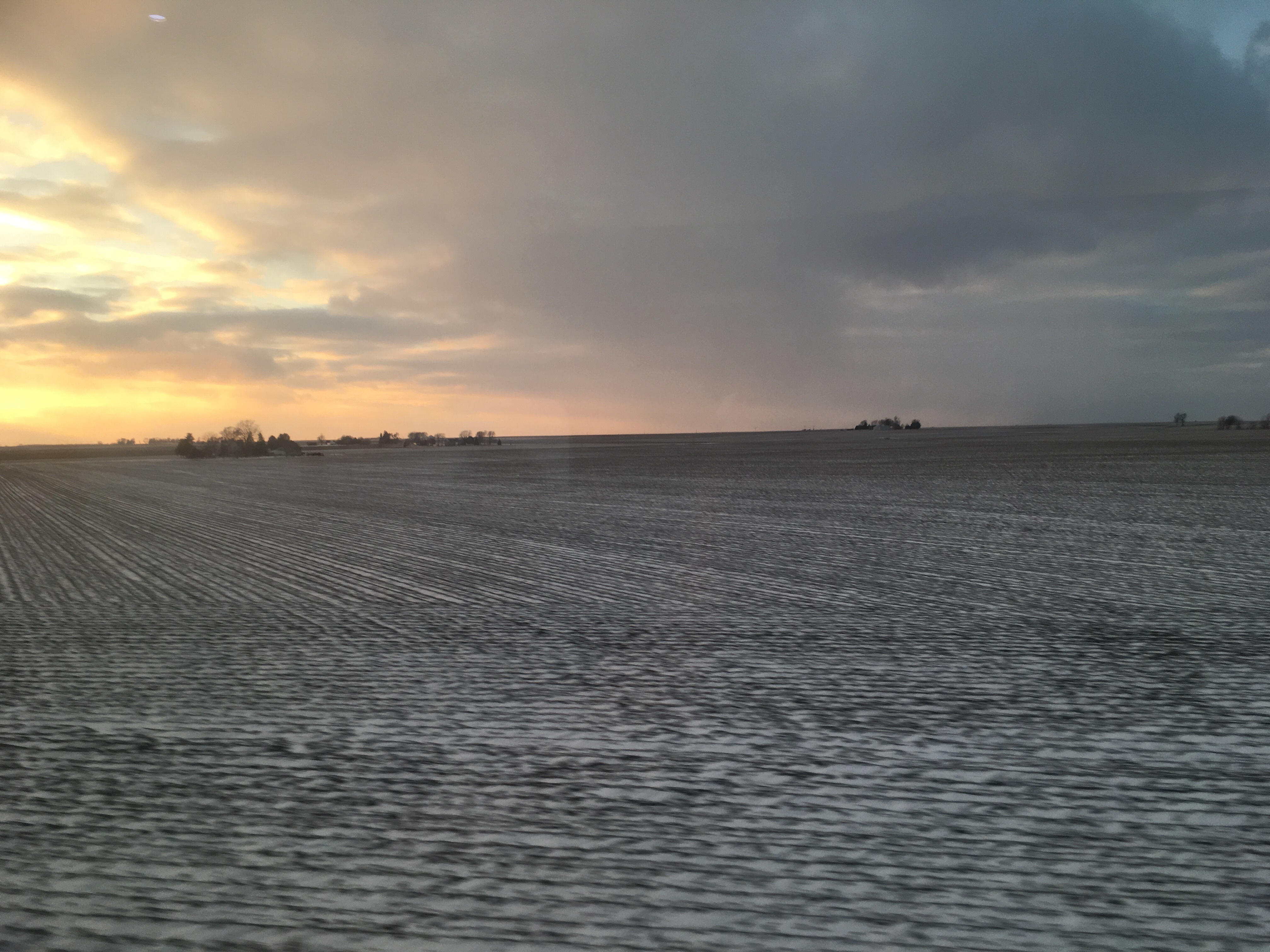 When I started writing, it was still March fifth. This an odd day, today, falling as it does between Clean Monday and Ash Wednesday, which, despite the seeming differences, mean the same things. In the East, Great Lent begins on Clean Monday, with fasting, prayer, and alms giving, having celebrated and consumed all meat and dairy within the house over the previous two weeks. The kitchen is made clean, in preparation for the season in which we clean our souls, in order to prepare a place for Christ within ourselves. In the West, Lent begins with ashes of repentance, which remind us of that slim divide between life and death, between Life and Death. Which might, from my small and weak explanation, sound different, but they aren’t. Just different words and signs for the same things.

So today, or for twenty minutes now, yesterday, has been a day between two fasts, between two worlds. Between to lives? Or modes of living.

Appropriately enough, my sister asked me tonight about the meaning of the biblical term for “unclean”. I was asked the same question at the FemCatholic conference this weekend, and I have her the answer I gave then, although a little more thirty ugly this time around.
After sorting through the English possibilities, I found נִדָּה nidah is the word I was looking for. Nidah does not mean filthy, or dirty, or immoral. It doesn’t refer to idols or profanity. It doesn’t even refer to sexual immorality. Each of these has its own word.

Nidah means something which is set apart, separate, and therefore it needs טָהֱרָה tahorah, purification or cleansing. These words are used when one has touched a corpse, whether for burial or another reason, for lepers and the diseased, for someone who has recently had sex or given birth, for a menstruating woman, to be purified from sin or contact with idols or heathens, but it also refers to the priests going into and out of the temple. As my sister points out, it is really more about liminal spaces. Birth and death, life blood or corruption of the flesh, the holy and the earthly.

Christ does something unusual with these liminal spaces. He breaks them down, crosses over them, and enables us to do the same. The lines between life and death become somehow both blurrier and more distinct as he brings them wedded to the cross. He makes the unclean to be clean, and allows us to cross these boundaries of life and death in his person, in his flesh, add we are wedded to him. When he rose, the dead rose and walked the streets. But it also was the beginning of the fall of the temple in Jerusalem. Life and death are not simple things.

We stand in the space time between the liturgical life and death of Christ, between Lazarus’ empty tomb and the cross, between the cross and the empty tomb of Christ. Life and Death hang in the balance. We spend Lent calling ourselves back consciously to this liminal space between the Fall and the Cross, in search of a tahorah that will resolve the tension of being set apart, in the world but not of it, living here, and hoping for Life. We seek to purify ourselves from sin and death and the diseases of the soul, from earthly distractions, but not from earthly life because birth and sex and the natural flow of the body is not something wicked or dirty to be overcome. It isn’t something to escape, from. It is something to be redeemed and made whole so that they serve as they were meant to serve, so that *we* serve as we are meant to serve, and live as we are meant to live, in the presence of Christ, in whom there can be no impurity.

This may seem banal, but I don’t think it is unrelated: I spent yesterday and today on a train, returning from a journey. My housemate and I attend a Ruthenian Catholic church, so in the Eastern way, we tried to keep Clean Monday, but as I sat at lunch, swaying to the unconscious rhythm of the train, I found myself staring at the dessert menu. Now, eastern Catholics have a different sensibility about Lent. The same theology, but a different poetry of the thing. In the West, we tend to eat less desserts, eschew nicer things as part of the Lenten sacrifice, but the east doesn’t do that. They have a harder ideal, but the reality is always softer and more personal. The monks eat no meat or dairy, almost no fats at all really, no eggs. It’s very vegan. But goodness, that doesn’t mean no chocolate. If your chocolate is dairy free, by all means eat it. And they don’t sweat the “exceptions”. There aren’t any rules. If you need to eat the meat, then eat it and don’t worry about it. It’s between you and your priest and its no one else’s business. We say we believe the same thing in Rome, but in practice, we are much more legalistic.
At any rate. There I was, sitting on the train, staring at the dessert menu, and I had decided to not eat the incredibly rich, flourless chocolate torte as a small concession to a major fast which my health won’t let me keep, but really, I had decided to do the very Roman practice of not eating dessert. Which was easy to justify because the other option was cheesecake. Dairy, see? No dairy in Leben fasting! Except I am under strict orders from at least five different priests, two deacons, and a horde of doctors to NOT FAST in either a Roman or a Byzantine manner. You will eat the food Tree, and you WILL like it! I continued to stare at the cheesecake. But I want to give up cheesecake, Jesus! It’s such a small thing. It’s just cheesecake! I’m overweight. I really shouldn’t eat the cheesecake. But I can’t stop thinking about the damn thing and it keeps calling to me from the menu, the waitress is approaching and I can hear my deacon and his wife teasing me from across two states and several weeks of absence. Well, I’m NOT eating the chocolate.
Somewhere in there I realized that I was staring at the half and half, seriously considering pouring several mini containers together with a few packets of sugar and eating the thing with a spoon, and I realized, something in my body is not satisfied and really needs the dairy or the fat or who knows what, but if I leave the table, I’m not going to stop thinking about it. I’ll just get cranky and snap at people. For whatever reason, I realize, I really should eat the cheesecake. I look at my housemate and she says, “Just eat the damn cheesecake.”
So I did. And I felt better. Physically, emotionally, spiritually, I just felt better.
I realized that the cheesecake was the wrong battle. Whether or not anyone else should eat the cheesecake, I have no idea. But that’s not what Christ is asking of me.

Lent comes in spring for a reason. The snow starts to melt, the crocuses poke up their heads with the grape hyacinths, the tulips, the daffodils, or, here in Texas, all the dandelions, and quickly upon their heels come the weeds.

Christ wants us to weed the garden of our souls. Whether or not I eat cheesecake is a fruitless question (pun intended) for me because my health demands that I feed myself all the things that everyone else at my parish is abstaining from. Which I know.

What he asks isn’t that I eat less. It’s that I eat with mindfulness and gratefulness, with love, and recognition that the body he gave me needs the food he provides through the hands of others. I can’t not eat the eastern fasting foods. I need the nutrition. I need to take care of myself. But I can take my time, and not be greedy when I eat. I can recognize the bounty I have, let go of wanting what I don’t need and accept what I am given.

I can’t do the normal almsgiving. But I can sit on my temper, I can lend a helping hand or encouraging word. I can give a struggling friend support. I can take my medicine so that I am a better and more pleasant person. I can be better about where I spend what I am given.

I can pray. It might not be amazing prayer, or consistent or very profound. It might be shallow. It might even at times (often) be a little stupid or selfish. But I can pray. For the people who drive me crazy, the ones I cannot stand, those I would really like to punch or give a tongue lashing to. I can pray for those who annoy me. Most difficult, I can pray for those who have hurt me, those that I am so tired of praying for because I want to jettison them from my life like garbage, along with all the damage they caused me. I want to live my life and leave them behind and never give them a moment’s thought, but that isn’t what Jesus is asking of me either.

Do you think Lazarus likes cheesecake?

This site uses Akismet to reduce spam. Learn how your comment data is processed.