Brief Notes on the Office and Pope Francis 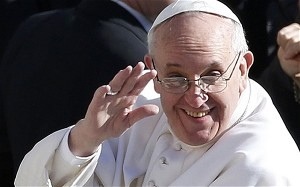 As I was praying last night, (time having proceeded in its annoyingly regular fashion), I was struck by a thought. Not a novel thought, certainly, but perhaps a small note to throw into the current conversation on our Holy Father, Pope Francis.

This father of ours has regularly been causing quite a stir. For some that translates to fuss and concern and even accusations of heresy, damage to Holy Mother Church, and possibly leading even to her destruction.

Some of this is related directly to the content of what Francis has been/is saying, but for many, the problems stem from reporters misrepresenting his words, bad translations, and in some cases deliberate distortions of his words, so that he appears to be saying something which is the opposite of what Francis actually said.

This understandably leads to a great deal of concern. Who really wants the world to hear crap or even heretical crap from the pope and think these false distortions are representative of the actual teaching of the Church? It’s a mess! How can the truth be heard amidst all this noise?

Several people have pointed out that this noisy mess might not be such a bad thing.

When Pope Francis was at World Youth Day this summer, he said the following to the Argentine youth gathered before him:
“Let me tell you what I hope will be the outcome of World Youth Day: I hope there will be noise. Here there will be noise, I’m quite sure. Here in Rio there will be plenty of noise, no doubt about that. But I want you to make yourselves heard in your dioceses, I want the noise to go out, I want the Church to go out onto the streets, I want us to resist everything worldly, everything static, everything comfortable, everything to do with clericalism, everything that might make us closed in on ourselves. ….May the bishops and priests forgive me if some of you create a bit of confusion afterwards. That’s my advice. Thanks for whatever you can do.”

His Holiness knows that there is confusion. How can there not be? We live in a fallen world, we are wounded by sin and concupiscence, the devil and his ilk are active in the world, seeking to undo the work of the Church. The pope speaks and people are so distracted by their apriori notions of what the Church should be that they aren’t very good at listening to what he is actually saying, and we faithful find ourselves needing to rush into the gap and defend the truth against all the nonsense that follows.

But here’s the thing: people are listening. I remember how frustrated I would get when John Paul II or Benedict XVI would say something and I’d know about it only of I bothered to check the Vatican website, when there was a website, because it wasn’t being regularly reported. If I wanted to know what he was saying, I had to search it out, and sometimes it was maddening to try to find any translations of a particular homily or address. As the Vatican’s website has improved, these documents are more readily available, but even as recently as last year I had to be proactive on searching then out.

These days, not so much. The media is constantly going crazy over everything Francis says. People who a year ago couldn’t care less are suddenly asking me questions. They hear things, sometimes true, sometimes not, and people want to know about it, and most everyone has strong opinions they want to voice. People are listening.

Francis is speaking the truth, and the truth has a power all its own. Even distorted, the truth is stirring peoples’ hearts, and better yet, these distortions are pushing regular Catholics to speak up and defend the faith. That in itself has a lot of people worried, for American Catholics are not notorious for being well catechized in their own faith, but for anyone willing to put any effort into things, this mess will have people digging to find the truth and talk about it.

I’ve seen the fruits of this already. One of my friends says it has helped him teach his students. They are more curious now, and more willing to ask questions about what the pope said and what the Church believes, precisely because of all the noise. I’ve seen a number if my non-Catholic friends jumping in on conversations with questions or comments. If it were up to each individual, true, this noise would only grow uglier and foul. But it ain’t up to us as individuals to be perfect apologists, it is up to us to try. To read and pray and ask questions or find resources when we aren’t sure of the answers, but most if all to pray and be willing to speak. The Spirit will provide the rest, if we are willing, if we have ears to hear, eyes to see. And mouths to speak.

For it was not in my bow that I trusted
nor yet was I saved by my sword:
it was you who saved us from our foes,
it was you who put our foes to shame.
All day long our boast was in God
and we praised your name without ceasing.

We triumph over all these things through him who loved us (Romans 8:37).

This site uses Akismet to reduce spam. Learn how your comment data is processed.